If I had known that taking a part-time job would neither add any money nor any time to my UI benefits I would not have bothered with it. I had many many other things I could have more (much more, it turns out) profitably spent my time on. A waste of three months. I'll know better next time? Even as I hope there will never have to be a next time?

What bothers me most, probably, about this, is that it seems to be further proof of a thought that has been haunting me for the past three years. I make bad decisions, quite possibly catastrophically bad decisions. No matter what the decision may have been, or why I made it, or how much thought went into it beforehand - the moment that I do make it, it becomes a bad decision. This is not a cheering thought, and I try not to dwell on it because that way lies despair - and I don't have time for despair. But it's been nagging me, and now I put it here, in the open as I confess I need to figure out why, and what I might be able to do about it.

( Collapse )It is amazing, and in some ways frightening (and comforting at the same time), how often one can reach the end of one's tether, just to realize there is more tether left. Even if you didn't want it. I don't want anymore tether, and yet...there it is. Forcing me to slide down even further.

I am tired. I do not want to slide anymore. Not sure why I'm bothering. And, there it is...more tether, and I keep going.

Or maybe not...I find myself struggling, mentally/emotionally, this week. It's been a little over a month now of me working full time, with the two-hour-round-trip bike ride, plus doing all the errand-y stuff...and I'm exhausted. To the point that I found myself unable to work up the energy to do much of anything this weekend.

Well, I did the dishes, went to a bbq Saturday, did dishes, laundry and made a quick shopping trip for extraneous items...but compared to what was planned, it was nothing. My brain simply refused to parse any but the most obvious tasks, and then I felt stressed and the weekend felt it was over too soon.

I hate that. It's like I never get to the good stuff. And working full time and still not being anywhere close to able to afford rent aynwhere just plain sucks ass. I want to be able to spend a lazy, or not lazy, weekend morning with my cats. In my own room. With my own shit. And I want it NOW, thankyouverymuch.

There's much I love about this area...and much that makes me want to nuke it from space, because that's the only way to be sure.

and the first day of my period. Everything I do is way harder than it has to be, wrong, or both.

Oh, extended hours of crafting, how I have missed you.

I worked on a bracelet and my (ever slowly advancing) socks, as well as doing some cooking. It feels good to have done so, after having done so little since starting full time and Stanford and biking to and from every morning. It's good, but exhausting. And I still miss the cats. The obnoxiously rising cost of residences around here make me question the viability of a long term stay.

There are also job openings for working in the Library full time, and I have applied for two of them. Working with people I worked with before (but not the same department, because I quit that job for a reason).

I am of two minds about this. On the one hand...Stanford is, in many ways, a fabulous place to work. It has good benefits, vacation time accrues at a decent clip and the free transportation passes are awesome. On the other hand, it feels like a step backward.

Then again, if it gets me the kitties back, and (I'm kind of hoping) a chance to get someplace better than the SoCal desert, I'll take it.

I did a volunteer thing at the San Jose Library this evening, and on the way I biked past the Fairmont Hotel. It is, in fact, quite close to the library, which I had never paid attention to before now...

The Fairmont is where Joseph and I spent out first night together. It is where we went when he drove up from LA to pick me up from the airport when I flew back from Soup that year, so we could spend a night and a day together before I went back to work. It is where we spent the visit just after the one when he got amazingly drunk so he would have the courage to tell me he loved me...and then the government came and took pretty much everything he had (because the company he had just quit was accused of tax fraud) and I did not see him again for 5 months.

That was a good year. Despite the last two years, I wouldn't trade that year, and despite the hardships and downturns, I'd keep the year after that, too. It had some definite high points. I just wish I had accepted them for what they were, and let it go when I knew it was over. Zombie relationships will eat you, just as surely as zombie people.

In other news, I haven't visited the cats in over a week, and I'm starting to get the jitters. SF this weekend, I think. 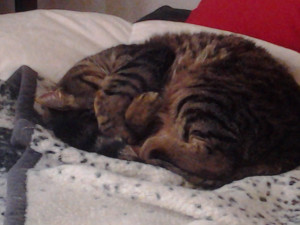 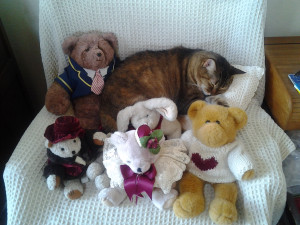 to be here in Venice. I keep remembering my trip.down to see my brother's film Redland, and spent the last truly good weekend with J.

I keep expecting to see him when I'm out. Logically this is highly improbable because a) Venice *is* a city and randomly running into someone is therefore statistically small, and b) unlikely he's even *in* this part of the state, assuming he's in the state at all.Then again, no one claimed emotions are rational. They're sort of famous for being the opposite.

Posted via LiveJournal app for Android.

Still not entirely happy about it, but I'm trying to use this "dead time" to develop some habits I've been wanting to cultivate for awhile. Like writing down my dreams first thing. Walking. The good thing about this area, there's some good walking spots. And the middle brother (who is also here) is a fitness nut. So I have a reminder to walk, and I do. Not every day, but most days.

There are other habits I haven't quite managed to get to stick yet. Like writing (aside from dreams) or drawing. And I've not done any fitness stuff other than the walking. But one thing at a time, yeah? And there's a good chance that once I decide I've had it up to here with this place...I've got someplace to land in the Bay Area. There's a chance I may have an occasional place to stay in SF, too, but I've not contacted that person yet. Baby steps.

I took a gamble and lost...rather painfully (and in the hidden details, personally humiliatingly), but I refuse to roll over and play dead. Or safely standard. No offense to the people who roll that way, but it's pure poison to me. Then again, I don't really want to starve while living a life sorta kiddie corner to the rest. Ill find that happy medium, even if I have to make it myself, dammit!
Collapse